Installation of a plaque on the family tomb

The tomb of the Bisschop family, in the Mailly-le-Château cemetery, did not contain any mention other than “BISSCHOP FAMILY”. It was necessary to make visitors to the cemetery understand the location of this tomb. It was not until help from Providence that a plaque was finally put in place. 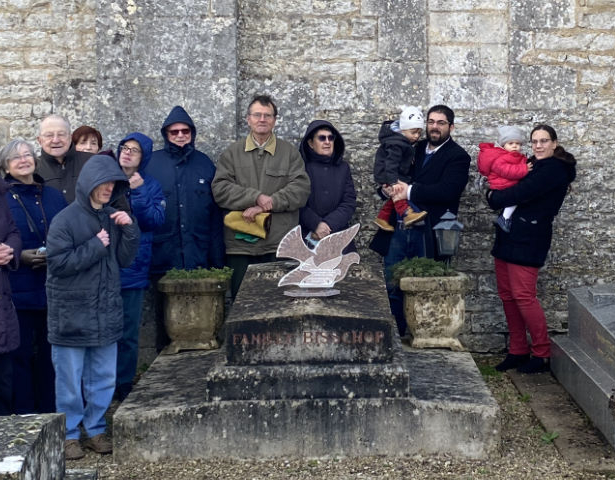 A member of the "Friends of Elise Bisschop" association had inherited a marble dove from her father, a marble worker. The person donated it to the association for Elise’s grave. Daniel, Elise Bisschop’s nephew, who ownes a nameplate manufacturing business, was associated with this providential gift. Thanks to a happy collaboration, a plastic plaque was made by Daniel with the inscription: “Here lies Élise Bisschop with her parents and other members of her family. The cause for Elise’s beatification was opened in 2017.”
The two plates were connected together by screws to form only one. On February 7, the plaque was installed after Sunday mass in Mailly-le-Château. All the parishioners who had the possibility came to the cemetery for a ceremony in all simplicity.
All were happy that the tomb of Elise and her presence in the vault were thus better marked.