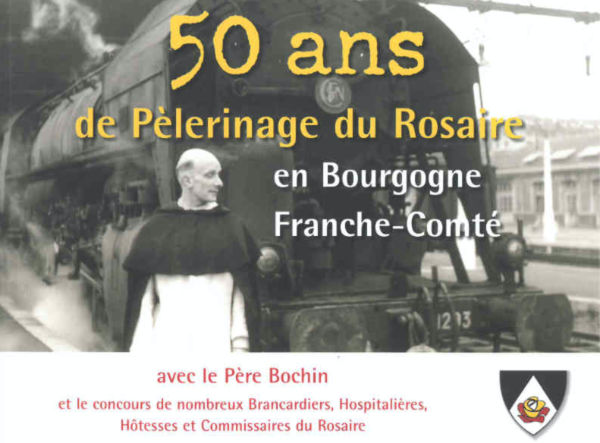 Elise knew Father Jourdain Bochin because a Dominican Sister spoke to her about the third order of Saint Dominic. Father Bochin was chaplain of a fraternity of the sick attached to the third order. He thus came to Mailly-le-Château where he met Élise. He had great respect for her from day one.

In a letter to a friend Élise said:

This morning, I received all the “paperwork” from the direction of the Rosary, because Father Bochin, director of the pilgrimage and at the same time responsible for my fraternity of the sick, still wants to take me! And me, who always hesitates to leave mom (if she feels unwell in my absence) and especially… if I come back to her too tired, thus giving her extra fatigue… On the other hand, the longer I will wait, the more difficult and risky it will be! For her as for me.

Not knowing what to decide, I will ask our doctor for advice, since we are lucky to have a beleving doctor, he must be of good advice ... and it must be very quickly!

Élise greatly appreciated the delicacy of Father Bochin, who at no time wanted to interfere with Elise's parish life or interfere with the special relationship between her and Father Générat.

He, a Dominican, will help me to become a Dominicane, but I will remain Élise; let's say he adds some colors to the canvas.

It was he who composed, after Elise's death, the very beautiful preface, rich in information, to the first edition of his poems of Elise (completely private edition). In fact, at the end of her life Élise had entrusted her with all her manuscripts.

Preface to the first edition of “Poems and Songs”

“My ambition in life (since the age of 13 (I think) : To smile upon everyone, through love for Jesus”.

Elise Bisschop lived that hope and ambition to the full, until her final hour (The sentence is a quote from a letter of introduction addressed to a small Dominican Fraternity for the handicapped and invalides, who received her as a member).

She entered the joy of her Lord, the Thursday of Low Week, 9th April 1964, in the General Hospital at Auxerre. Her smile was remembered, and shone for all who encountered her there. The smile, which she offered to one and all defined her. She shared it through a life always full of trials. Thus we have known her and the memory of her smile remains in our hearts.

A daughter of God by baptism, she received the grace to reflect through the eyes of the soul (her eyes) her “Father’s” joy. Through that smile she shared her faith, her christian life, her church. Her parish priest affirmed: “In my parish she knew how to make religion lovable”.

Only a particular grace can explain that special radiance in Elise.

She was born in Trucy-sur-Yonne (Yonne Département) the 31st May, 1925, in an isolated farm hidden in the woods (she attributed her love for the countryside and creation to that birth-place...)

The family removed to Mailly-le-Château. When Elise entered primary school, in spite her asthma and bronchial troubles she was able to share normal school life. Nonetheless she was obliged to remain in doors in winter during class recreation. She tells us that she was never free to run. Aged 12 in 1937, she gained her certificate of primary studies ; 1st place in the canton.

A new operation was necessary for mastoids in 1939, and, with it the 2nd World War began, with all its trials, restrictions, anguish and humiliations.

Elise found joy and resource in work with the J.A.C.F. (Jeunesse Agricole Catholique Féminine) and catechism of the children. And, the theatre and singing. Progressively however her illness obliged her to accept the fact that she could no longer sing.

She was adept in the art of floral decoration for her church, and, never ceased to praise God for the beauty revealed in His floral creation right to the end.

The years passed and in 1951 her beloved father died, an invalide since the 1914 war, worn out by dickness and the cares of life. She inherited from her father, a painter, her love for the natural world, landscape, and the seasonal change ; the harmony of colour and one contemplative vision which was truly franciscan. She could always marvel, “wonder”, when contemplating the most humble and little things of creation.

From early teen age Elise discovered in herself a soul able to sing the glory of creation ; snow, wind, birds and flowers. For her, all creatures, formed in God‘s hands, are created to arise and praise Him, simply because they exist by the grace of God. In intimate friendship with the Father Elise contemplated intuitively the interior landscape of things and the mysteries of God ; that wisdom hidden from the wise and sophisticated of this world but accessible to the humble and “little people”.

In her mature years Elise always retained a child like soul capable of marveling before the mysteries of God‘s love.

In January 1961 thanks to a friendship with a Dominican missionary (a “Soeur des Campagnes”) Elise began her friendship with the Dominicans, in particular with the Fraternity of the Sick. Her yearning for the Light of Christ and zeal for truth ; her well refined interior life and apostolic spirit blossomed naturally in the Dominican family. And, in consequence, her knowledge of the Faith increased in structure and depth.

About the age of 13 Elise commenced to write poetry and songs. In due course she classified them in logical order. The titles of the three poems quoted are her choice (A 4th is included, here). They contain a message of peace, simplicity and joy. We share them rather than leaving them unknown (Except for those who knew and loved her). In her poetry Elise was not seeking to achieve literary renown. Her aim is to “sing”, in her own way, the Good News of the Gospel and to share this with the world at large ; especially with those who struggle and suffer. She sings the joy of the Gospel that she lived throughout her life as an invalide.

“Joy invaded my soul
With the happy secret of love,
And when the flame of love falls asleep
I smile so as to revive joy in my heart...”

In Our Lord‘s school she learned to share love and joy. Without doubt this is the secret of her radiance of soul.

If it had not been for this preface, much information about Élise would not have been known, first of all her magnificent motto which colored all her spirituality.