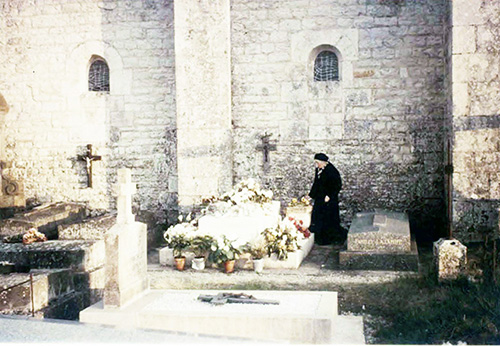 Elise’s parents had no family ties in Yonne. When Marie, Elise’s mother, died in 1979, the house was quickly sold by Pierre, Élise’s brother. After this date, the inhabitants of Mailly-le-Château no longer had any contact with the family.

The surprise was therefore enormous when, in September 2017, one of Victoria's daughters, Elise's best friend, sent about a hundred letters to the cause of beatification, of which 63 were written by Marie to Victoria. One would never have believed in such an action from Providence if it had not once again taken the initiative.

Certainly, the letters already found spoke of a great love between the daughter and the mother. Obviously, it was not always easy for these women to live together every day because Élise was growing up and demanding her independence. Her understanding and great respect for her mother, however, always remained exemplary.

And conversely, her letters prove it, Marie had a deep admiration for her daughter and her exemplary of Christian life.

The month following the death of her daughter, Marie expresses her respect for her daughter:

Thank you for your compassion, I know how sincere it is. You feel well that I lost my Soul… and that I remain all bruised… While repeating to me that she is happy now, that she no longer suffers. It is nonetheless true that it is terribly hard! I am so far from worthy of Her! I embrace you all very sadly. Mrs Bisschop

The following year, in 1965, Marie recounts that Father Bochin had come to pray at Elise's tomb and that he gave a beautiful testimony in her memory:

My best friend,
Thank you for your loving thought. I know very well that “the little sister” is not forgotten by you. It is a softening of my grief. If it is given to me to see this new spring again… without my darling daughter it is too cruel! I cannot forget her sufferings so courageously accepted and offered, her last hours, her last minutes… and I can only cry! I don't have her courage!

Yesterday, I had a visit from Father Bochin who came to pray at her grave. He said to me again: “it's not always that we have the grace to meet in our life a girl like Élise.”

In November of the same year, Marie recounts that people came to lay flowers on the tomb:

Anonymous friends passed there in the interval between the 2 visits I made to the cemetery today. And despite the sudden bad weather, nothing has suffered at the tomb; neither at your dear mother, so well flowered.

It is very moving for me to feel this fidelity to my beloved Child. I think well that my “beloved Angel” does not forget to protect all those whom she loved here below; I like to believe that the Lord cannot refuse her anything…

In 1966, she reiterates her attachment to her daughter:

My best friend.
On this Easter Day, it is a sweetness for me to reread your good lines, to feel you with me near my darling daughter. Thank you from the heart. By following the Stations of the Cross I tried to regain courage, I who am so far from our Divine Model! This morning the mass was said for this anniversary… The parish priest had decided so.

For me every day is a memory day but I cannot help reliving these last hours, these last minutes when I felt what I held most dear in the world going away!

The same year, Father Bochin returned to the tomb:

My very dear Victoria
A few days before, I had had a comforting visit from Father Bochin. He likes to come and pray to Her at her grave, thinking that “we need her help more than she needs ours.”

In 1967, she reminded Victoria of the suffering endured by Élise:

On this day of her 42 birthday, I cannot help reliving so many memories, sweet or sad, throughout this life of physical and moral trials that was hers!

Nine years after the death, the mother reveals that Elise predicted her own death:

Very dear friends
It is the precise hour when my beloved daughter passed away, next to me, without a complaint despite her suffering, after having said to me: “Mum do not go away, I am going to die this evening”.

Of course I relive those last tragic minutes, so cruel despite the years. And it is to the “Little Sister” whom she loved so much, that I owe these affectionate lines which touch me. Thank you with all my heart my dear little one. With Father Girard, these are the only thoughts I get.

And the following year, as though the memories grew stronger over the years, she spoke still of her daughter's agony:

My best friend
Thank you for this touching letter that I receive very faithfully to make me feel that my “darling Angel” is not forgotten. It is the exact hour when my beloved daughter breathed her last in my arms… without a complaint, when she had just answered the question I asked her: “are you in pain?” – “Everywhere”. How hard it was! The sun was shining: she who loved nature so much…

If Providence has allowed these letters to come back to the light of day, it is because they show, through the simple words of a loving and believing mother, the great courage of Elise, as well as her fidelity to the Lord, until the end.