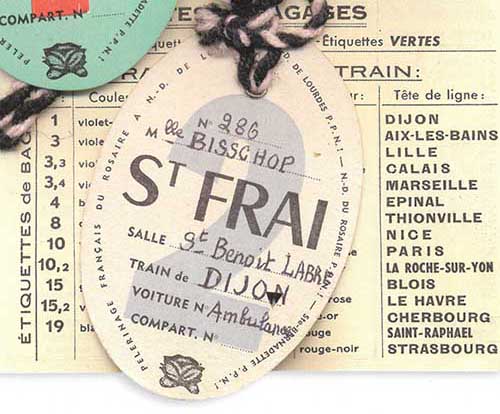 The parish found itself without a priest from 1958 to 1960. The Dominican Missionary Sisters of the Countryside, then based 30 km away, in Island, offered their help as support for catechists. Élise will form a strong friendship with one of the nuns, Sister Solange, who was her age.

This friendship will be providential and will be the beginning of the link between Elise and the Dominican Order. Élise says:

She passed me a book that told the story of a young patient, jocist (Jeunesse Ouvrière Catholique – the Young Catholiques Workers) and… Dominican tertiary. But the combination of these two things struck me a lot. Tertiary… it seemed like something from another age, old-fashioned; irreconcilable with modern life. In addition, this kind of "half measure" did not attract me. I said to myself: "We are completely religious, or secular…" So the story of this young girl who was a jocist, so up to date, and tertiary, seemed to me like a kind of appeal, if not to imitate her immediately (I do not get carried away all the same so quickly) at least to ask myself the question seriously. I spoke about it to Sister Solange, who has since passed me a certain number of documents, - reviews of Franciscan and tertiary journals, especially of course.

Élise will end up requesting to entry into the third order, and more specifically, into a third order adapted to the sick: La Fraternité de Notre-Dame du Rosaire. In this way she came to know Father Jourdain BOCHIN, Dominican Brother of the Dijon convent, director of the fraternity of the sick.

Élise made her vows of commitment during a pilgrimage of the fraternity to Lourdes in October 1962. Father Bochin kept Elise's pilgrim badge in the pilgrimage archives as the only copy. This badge was surprisingly found in August 2016 in Besançon.

Élise was very happy with her membership in the Fraternity, and she told Father Générat:

I have attached, if you are interested in them, the first 3 messages that I sent and which came back to me annotated by all. (It takes more than 2 months to circulate - the messenger is called "pigeon", because travelers!) The drawings and red texts are by Father Bochin. There is always a subject to deal with, and that interests me. Some of the work of others is really great…

It is to Father Bochin that Elise will entrust the collection of her Poems and songs; he will make a private edition of it the month following Élise's death. He put in a very nice preface which is an important source for learning about Elise's life.